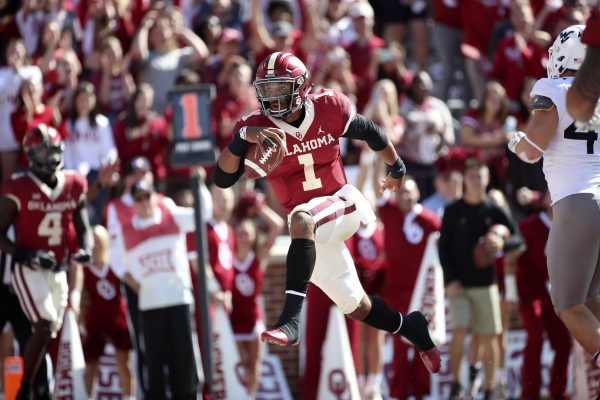 Think you know college sports? Brag House gives players a FREE chance to test their sports acumen to win cash and prizes. Make sure you subscribe now for Brag House launch details and to get on the right side of the week!
The teams and the final scores aren’t the only stories making headlines in college football. Each year, several standout players will make their mark on the college football season and we here at Brag House are highlighting some of our favorite stories of the year. First up, from “back up” to “back in it”, this is the story of how a record setting Alabama freshman found a new chance at glory at another top program, and how one magical season could possibly change everything in the process.

Road to the Heisman: Jalen Hurts

There are a lot of great examples of sports stories that have been told over and over again. The two most popular, it would seem, are that of the “underdog” and the “comeback” story. Everyone loves to root for the underdog; it’s why movies like Rocky and Rudy exist. And a comeback story is always fun to root for, like say when Tiger Woods won The Masters earlier this year. People want to feel good about the athletes they’re rooting for, especially if there’s a good story behind it.
That’s why the story of Jalen Hurts is so intriguing. To go from heralded freshman to a benched sophomore to a back up in his junior year to now leading the way for another top 25 program? It’s remarkable, it’s unprecedented and it just might be the best story of the college football season.
In 2016, Jalen Hurts made his debut as the first true freshman quarterback in the storied history of Alabama football and it was a historic season to say the least. He led the Tide to an undefeated regular season record of 13-0 behind his 2,870 yards and 23 scores with a QBR of 139. He added nearly 1,000 yards on the ground to go with 13 TDs, the first QB to do so under Nick Saban. His 36 touchdowns were the most by any Alabama player in history, and those numbers propelled him to win not only SEC Freshman of the Year honors, but also SEC Offensive Player of the Year. The Tide lost, however, to Clemson in the National Championship game.
Hurts came into his sophomore season looking to avenge the loss in the title game and, possibly, put his name in the Heisman discussion. While his numbers regressed slightly, he only turned the ball over once in 14 games and totaled 25 TDs on the year. The Tide went 13-1 that season, their one loss coming against rival Auburn which would also keep them from defending their SEC Championship. Still, Alabama was good enough to for the committee to put them into the CFB Playoffs as a 4 seed, where they would end up facing Georgia in the title game.
That’s where everything changed…

After a 2018 Sugar Bowl win against Clemson the game before, in which Hurts only threw for 120 yards to go with two scores, there were questions surrounding the Tide’s offense and how it would stack up against a ferocious Georgia defense. With Bama down 13-0 going into halftime, Nick Saban made a decision that would alter the course of his team and his starting quarterback’s college career: he benched Hurts in favor of another true freshman, Tua Tagovailoa. Hurts sat on the sideline and watched as Tagovailoa rallied the Tide back to force OT and win the game on a 41-yard TD pass. Hurts and the Tide won the national championship. Tagovailoa was named MVP.
The 2018-19 college football season found Nick Saban in a tough spot. Sure, having two guys on your team who can play quarterback at a high level is a good problem to have, but only one of them can play. Coming into the previous season, many people were high on Tua and thought he’d take over when Hurts left. However, all it took was one game for him to completely usurp Hurts on the depth chart. He started the first game and never looked back. He became the face of the program, setting the NCAA FBS record for passing in his first year as a starter and earning his first Heisman nomination in the process. The Tide belonged to Tua.
Well, he did what any good teammate would do; he took the backseat in order to give his team the best shot at repeating as champions. He played sparingly over the course of his junior season, coming in relief during blowouts or in certain offensive packages that required his skills as a runner. He did what was best for his team, and when Tua went down with an ankle injury in the SEC Championship game, Hurts was given the keys to the offense one last time and brought the Tide back to beat Georgia 35-28, including scoring the last TD to give them the win and pushing them into the CFB Playoffs once again. Once again, however, the Tide would lose to Clemson in the title game.
It was a testament of perseverance and loyalty, something that you can’t teach. In an era where college quarterbacks are transferring to other programs in order to get a starting spot, Hurts sticking around with Alabama was something of an anomaly. Nick Saban knew that much, and allowed his once touted prospect to transfer to another school where he’d have a shot to play. Hurts received his BA in Commnunications as a junior, making him a graduate transfer for the 2019 season and making him eligible to play right away. The question was where would he go?

For the last two seasons, The Oklahoma Sooners have produced not just the last two Heisman winners but also the last two top picks in the NFL Draft. Baker Mayfield and Kyler Murray thrived in coach Lincoln Riley’s high powered offense, and Riley was gifted another talented playmaker when Hurts showed up in Norman this summer. It was a fresh start for a player who had only played a few bad games in his career, a chance to remind everyone — including Alabama — what they had forgotten: the kid can ball.
In his first game as a Sooner, Hurts set the record for most total yards by a QB by pouting up nearly 500 yards on Houston. It’s easy to get excited and carried away over one game, let alone the first, but Hurts is giving Oklahoma fans legitimate reasons to cheer. He’s been nothing short of spectacular through the first half of the season, throwing for 2,074 yards and 20 TDs and adding 705 yards and 10 TDs on the ground. His 95.2 QBR is second in the nation, narrowly sitting behind one person: his former teammate and Heisman front runner, Tua Tagovailoa.
Oklahoma is currently 7-0 and aside from a 31-24 win against Texas earlier this year, they haven’t really been challenged. Much like the two quarterbacks that started before him, Hurts is tapped to lead an efficient offense deep into the postseason and possibly stamping his ticket to New York City for the Heisman ceremony. It would be a hell of a moment for both the program and the player, but this could also be the most improbable Heisman run in college football history if it plays out a certain way.
It’s one thing for a team to win back to back Heismans, but three in a row? That’s never happened before. You know what else has never happened before? Two former teammates vying for the same coveted award, a year removed from one taking the starting job from the other. If Jalen Hurts were to win the Heisman this year, it would be the perfect way to end this story. But individual awards, while great, aren’t the be-all, end-all of this story. Jalen Hurts wants to win a national title. With the way his team is playing this year, he’s going to put them in position to do just that. Perhaps against his former team? Now that would be a hell of a way to end the Jalen Hurts saga!
Whether he wins the Heisman this year or the national championship — or hears his name called in the first round of next years draft — isn’t what people will remember about Jalen Hurts. The fans, both Alabama and Oklahoma alike, will remember what a great teammate he was and what he meant to both programs. He’s an example of why you don’t quit or give up when the going gets rough. Even when it hurts, you have to pull yourself up and keep fighting.
You want a good comeback story? A good underdog story? You could rewatch Rocky or Rudy or whatever feel good sports movie written for the screen. Or you could tune in every Saturday and watch a real life redemption story take place right in front of your very eyes. Jalen Hurts may have been overlooked — and at times, underappreciated — at Alabama, but he knows the world is watching now and he’s going to put on a show. Not many people get a chance to do that, let alone a second chance, and if this season is any indication of what Hurts is capable of at the next level, we’re going to be seeing a lot more of him on the weekends for years to come.

SF
I love sports. If you’re reading this then you share that same sentiment. There’s nothing quite like watching your favorite team go up against a rival or compete for a championship. It gets even more fun if you can win cash or prizes because of your knowledge! But, do you know what’s better than winning money? Not losing money. Not even having to risk a dime actually! What a concept! We at Brag House think so too! Thus, we have made it easy and accessible for fellow bragger both new and experienced. Worried about losing your hard earned money on a close game? Forget about it! At Brag House, the only currency you need to worry about are Brag Bucks, which we supply, and, of course, bragging rights. So subscribe now to be the first to download when we go live Nov 5th -- and we will give you Brag Buck! Invite your friends or challenge that co-worker you don’t like - And we will give you Brag Bucks! It’s so easy your grandmother could do it, and after she beats you in a head to head matchup maybe she’ll send you some Brag Bucks for Christmas.
Share
0