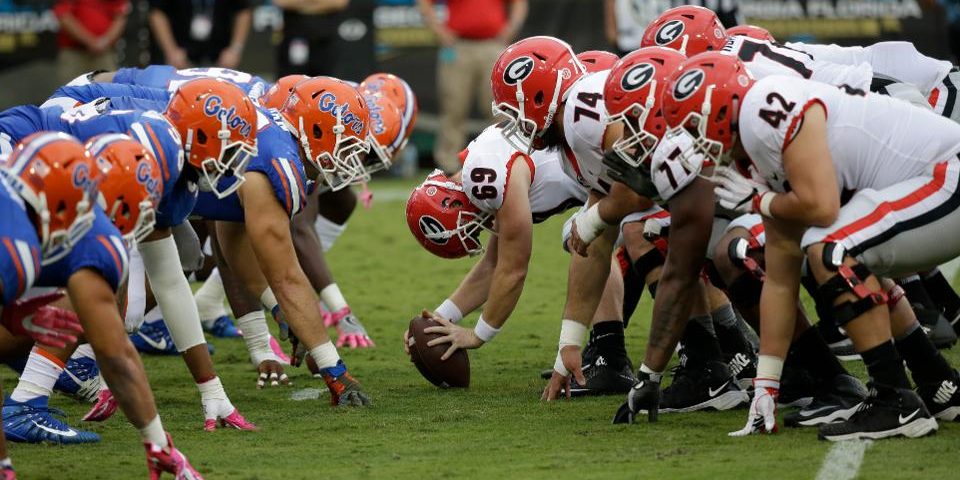 Think you know college sports? Brag House gives players a FREE chance to test their sports acumen to win cash and prizes. To get ready for each week, our in house expert Shea Freeman analyzes each AP Top 25 team and what to expect for the weekend; gives you his predictions on the upcoming games of the week; and follows up with takeaways to help you make sense of the crazy things that happened on Saturday. Make sure you subscribe now for Brag House launch details and to get on the right side of the week!

Game Of The Week: The Largest Outdoor Cocktail Party is back in action this week, as longtime rivals Florida and Georgia meet up in Jacksonville for what will likely decide both teams’ fate. The Gators and Dawgs are both in the mix for the SEC Championship game — and a potential CFB Playoff spot — and whoever wins this game won’t just get bragging rights, but will keep their season alive as well. Florida’s offense has improved lately, while Georgia’s offense has stalled a bit. That might be the difference maker as both teams have pretty good defenses, but if QB Jake Fromm gets back to his old form — behind the largest offensive line in the country — I’d give the edge to Georgia in what will be a very evenly matched game. Pick: Georgia (-6) (Saturday, 3:30 ET; CBS)

Now the top dog in the Big 12, Baylor is looking to make a run at a conference title. The Bears have steadily improved on offense over the course of the season — their point total inflates with each passing game — and should have no problem keeping that going against a West Virginia team that is giving up 37 points a game versus putting up 22 a game. Baylor will keep their unbeaten streak alive heading into the weekend. Pick: Baylor (-17.5) (Thursday, 8:00 ET; ESPN)

The Mountaineers are enjoying one of their best seasons in program history and a Halloween matchup up against Georgia Southern should have them getting treats and not tricks. Their offense has been firing on all cylinders this season, but their defense has improved over the last three games allowing only 17 total points over that span. Georgia State is averaging 50 passing yards per game (yikes) and if the Mountaineers can force them to throw this one could get ugly very quick. Pick: Appalachian State (-15) (Thursday, 8:00 ET; ESPNU)

The season is starting to turn around for Michigan, thanks to their 45-14 beat down at home against a very good Notre Dame team. Maryland doesn’t have the caliber of defense that the Irish employ — they allow 29 points on 425 yards per game — and the Wolverines rejuvenated offense should continue their upward trend. However, they’re defense will need to put up a similar output against the Terps (32.4 points per game) in order to come away with the win. Pick: Michigan (-20) (Saturday, Noon ET; ABC)

The Demon Deacons are quietly the second best team in the ACC and with starter Jamie Newman back under center, the offense should start clicking against NC State. The issue with Wake Forest is their tendency to allow the opposing team to stay in games — their last 3 games were all decided by 3 points or less. The home crowd should be a factor, but I wouldn’t be surprised if the game gets tight in the fourth quarter. Pick: Wake Forest (-7) (Saturday, Noon ET; ESPN)

After putting up their worst outing of the season, the 16th ranked Fighting Irish host a decent Virginia Tech team that has been hot as of recently averaging 40 a game over their last 3. However, they don’t possess the same skilled defense as Notre Dame and if the Irish want to have a shot at a New Year’s bowl game, they’re going to have to have to play more rounded than they did last Saturday at Michigan, especially QB Ian Book (12.9 QBR against Michigan). Pick: Notre Dame (-17.5) (Saturday, 2:30 ET; NBC)

A week after pulling off the upset of Oklahoma, Kansas State travels to Lawrence to face in state rivals Kansas on Saturday. The Wildcats are a sneaky good team and put up their best offensive performance of the year last Saturday, but the Jayhawks put up better offensive numbers than their ranked counterpart. If Kansas State’s defense can play the way they did in the first half of the Oklahoma game, they should be able to survive a potential scare from Kansas. Pick: Kansas State (-5.5) (Saturday, 3:30 ET; FS1)

The Tiger’s offense is getting hot at the right time and this week they’re playing a Terriers team that is capable of putting up points albeit against lesser opponents. They haven’t played a defense like Clemson’s, however, and going into Death Valley is hard even for ranked opponents. The spread on this game is currently at 47.5 in favor of Clemson (WOW) and while that number seems astronomical, consider that Clemson has beat their last three opponents by an average of 38 a game. This one is over before it even starts. Pick: Clemson (-47.5) (Saturday, 4:00 ET; ACC Network)

This is a sneaky good game. Utah put up their most balanced performance of the season last week against Cal, but this week they travel to Seattle to face a Washington team that is capable of putting up big offensive numbers against solid defenses (31 against Oregon two weeks ago). The Utes offense is centered around their run game, and if the defense can keep the Huskies off the field long enough to control the clock, they should be able to escape with a win and keep their long shot playoff hopes alive. Pick: Utah (-3.5) (Saturday, 4:00 ET; FOX)

Lock of the Week: Auburn lost a very close game against top ranked LSU this past Saturday, but the Tigers shouldn’t be bummed out for long as they host Ole Miss. Freshman QB Bo Nix is much better at home than he is on the road and after three consecutive games away from Auburn, the offense should get back on track against a Rebels team that gives up 408 yards a game. With the way their defense looked against LSU’s high powered offense, Auburn should have no problem in this game. Pick: Auburn (-18) (Saturday, 7:00 ET; ESPN)

The Bearcats are coming off their bye week healthy and ready to roll, and this Saturday they face an East Carolina team that let UCF and USF hang 40 points each on them these past two weeks. Minus that 42-0 shutout against Ohio State, Cincinnati’s defense has been pretty good this year and that trend should continue this week against a Pirates squad that is prone to turning the ball over. RB Michael Warren should thrive against a defense that is coughing up nearly 200 rushing yards per game. Pick: Cincinnati (-23) (Saturday, 7:00 ET; CBS Sports)

Had it not been for that pivotal SEC matchup in Jacksonville this weekend, this game might be the Game of the Week. Both AAC contenders are gashing opposing defenses and averaging over 40 game each. The key to this game will be which defense can stop the run, as Mustangs RB Xavier Jones (884 yards, 14 TDs) and Tigers RB Kenneth Gainwell (979 yards, 11 TDs) are going to be the focal point of both offenses. One thing to note is Memphis allows 70 rush yards more per game than SMU, and if that holds up I like the Mustangs to win a close one on the road. Pick: SMU (+6) (Saturday, 7:30 ET; ABC)

Potential Upset: USC has been the in the thick of the PAC-12 all year despite their 5-3 record. Their win a few weeks ago against Utah has put them in contention for the conference title game, but they face arguably their toughest test of the year against an Oregon team that can beat you on both sides of the ball. The Ducks have had a string of close games recently, but going against a freshman quarterback should provide the offense enough opportunities to control the game. There’s a lot riding on this game for both teams. The Trojans will make it interesting at home but Oregon is in a position to sneak into the playoffs. You gotta think they’re gonna be ready for the upset bid. Pick: Oregon (-5.5) (Saturday, 8:00 ET; FOX)

Potential Upset: This one can go either way, depending on who starts at quarterback for the Broncos. QB Hank Bachmeier has been out with a hip stinger and while backup Chase Cord is still a good option, the offense runs better with the freshman under center. The upset potential is here, however, as San Jose State is fighting for their first bowl game appearance since 2015 and after two straight road wins, a win against a banged up Boise State would look very good on their resume. The Broncos have far more talent and should win this game, but part of me likes the Spartans to cover the spread at home. Pick: San Jose State (+17.5) (Saturday, 10:30 ET; CBS Sports)
SF
I love sports. If you’re reading this then you share that same sentiment. There’s nothing quite like watching your favorite team go up against a rival or compete for a championship. It gets even more fun if you can win cash or prizes because of your knowledge! But, do you know what’s better than winning money? Not losing money. Not even having to risk a dime actually! What a concept! We at Brag House think so too! Thus, we have made it easy and accessible for fellow bragger both new and experienced. Worried about losing your hard earned money on a close game? Forget about it! At Brag House, the only currency you need to worry about are Brag Bucks, which we supply, and, of course, bragging rights. So subscribe now to be the first to download when we go live Nov 5th -- and we will give you Brag Bucks! Invite your friends or challenge that co-worker you don’t like - And we will give you Brag Bucks! It’s so easy your grandmother could do it, and after she beats you in a head to head matchup maybe she’ll send you some Brag Bucks for Christmas.
Share
0