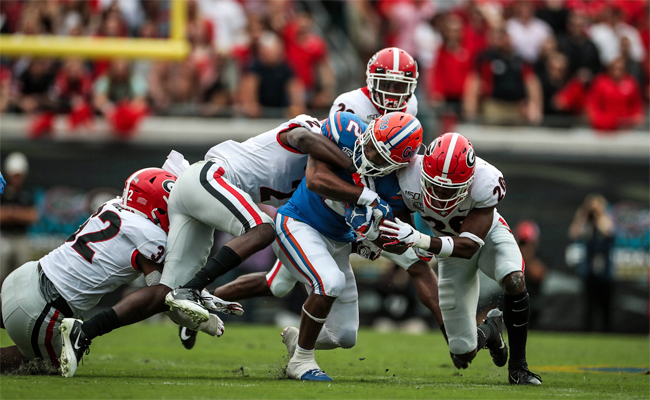 Think you know college sports? Brag House gives players a FREE chance to test their sports acumen to win cash and prizes. To get ready for each week, our in house expert Shea Freeman analyzes each AP Top 25 team and what to expect for the weekend; gives you his picks and predictions; and tries to help make sense of the crazy weekend that just happened. Make sure you subscribe now for Brag House launch details and to get on the right side of the week!

1. Georgia edges Florida, stays alive in SEC race. The Largest Outdoor Cocktail Party was a rousing success, for the Bulldogs that is. After putting together a string of lackluster performances recently, Georgia finally looked like their old dominant self, handling the Gators 24-17 in a game they dominated most of the way. QB Jake Fromm had two touchdowns and the defense held Florida in check for most of the game, including allowing only 21 yards rushing. This is the type of game you would’ve expected from a Georgia team that many figured would be in the discussion for the CFB Playoffs and while they still have a long road to go, this win in Jacksonville is surely going to help them fight for the SEC and, potentially, that coveted playoff seeding.

2. Clemson blasts Wofford behind Travis Etienne’s historic day I said before the weekend that this game was over before it even started, and I was wrong; it was over by halftime. The Tigers were up 42-0 and even more impressive was how they managed to do it. RB Travis Etienne seriously wants to be in this Heisman discussion after putting up 212 yards and two scores on just nine carries… in the first half alone! And that was all the star RB needed to do, as his fellow offensive star QB Trevor Lawrence added another three touchdowns to the mix en route to a 59-14 thrashing of the Terriers. This Clemson team is starting to heat up offensively and if there was ever a lock for the CFB playoffs, it’s Dabo Swinney’s team. One of those two players might sneak into an already deep Heisman discussion, and I think definitely Etienne deserves the consideration.

3. Oregon crushes USC, Utah takes care of Washington While most of the power conferences took the week off — half of the top ten teams were on byes — the PAC-12 suddenly had the spotlight to themselves, with two key games this past weekend to determine conference fates. Utah not only needed to survive Washington’s upset bid (they did, 33-28) but also needed the team that upset them a month ago, USC, to lose to Oregon. Thankfully, the Ducks took care of business for both teams in a convincing 56-24 win on the road. With all of the teams ahead of them either on a bye or coming a way with a win (minus #8 Florida), neither team is primed to move up any farther but Utah is probably going to take Florida’s spot, setting up a dead even race between these two PAC-12 foes. The stage is set for them to clash in the PAC-12 championship, now all they have to do is win out to make that happen. Easier said than done this year…

4. Baylor escapes at home vs West Virginia, stays unbeaten The Bears fought a close game against the visiting Mountaineers this past Halloween and while they came away victorious, they didn’t do much to prove to me they are a legit contender. Sure, they had on the costume for the festivities, but they allowed a pretty bad West Virginia team to hang in there a week after taking the top spot in the Big 12 from Oklahoma. The Sooners are a very good team — perhaps even the best still in the Big 12 despite the loss to Kansas State — and I don’t think Baylor has what it takes to win the conference. They haven’t faced a ranked team, yet every matchup they’ve had has been a close one. It took multiple OTs to beat Texas Tech (in a game they should’ve lost) and have let mediocre offenses put up points on them. They still have TCU, Texas and Oklahoma left on their schedule… it’s about to get brutal for the Bears.

5. Memphis ends SMU’s perfect season In what was probably the most exciting game of the week, the #15 ranked Mustangs fell to fellow AAC foe, #25 Memphis, 54-48. It was a weird win for the Tigers, who dominated most of the game but let SMU crawl back in it late. Both teams amassed over 1,100 total yards of offense without a single turnover, although one team managed to record 16 penalties worth 134 yards. However, that team won, which makes looking at the box score scratch your head a bit. Both teams played practically the same game, with the losing team outperforming the winning team, but the Tigers managed to hold onto the ball for five minutes longer and were more efficient on the ground. It gets really interesting for both teams in the coming weeks.
Other News and Notes

The AAC is a fun conference. #17 Cincinnati escaped East Carolina 46-43 and are sitting pretty atop the AAC standings and look like a lock for the conference championship. Meanwhile, Memphis can make up some ground with a win against the Bearcats in a few weeks, but they’ll need Navy to lose a game before then. Likewise, SMU just has to win out and hope that Memphis and Navy both lose if they want to still have a shot at Cincy in the conference championship game — and a potential New Year’s Day Bowl. It may not make headlines like the power conferences, but the AAC has been fun to watch all year and if last week’s games didn’t at least convince you to check it out, then I don’t know what to tell you.

Notre Dame escapes Virginia Tech, eyes possible coaching change There has been talk all week about the Irish potentially parting ways with head coach Brian Kelly and after watching the team struggle to get anything going early against a pretty decent Hokies squad, I’d say that would be a good call. Much like Michigan, the Irish are a storied program that expects excellence every season. While Kelly did lead the team to a national title game and to the playoffs at least once, they haven’t looked that great this year despite their 6-2 record. There are rumors that Kelly could be bought out of his contract to pave way for Urban Meyer (gross) but the Irish are stuck on the outskirts of the playoff picture and should probably look forward to next year. Whoever takes that job is going to have a talented roster, but a culture change is desperately needed at this point.

Player Spotlight: Travis Etienne I have to talk a little more about the Tigers star running back… I already mentioned the monster day that he had against Wofford, but taking a deeper look into the year he’s having it’s kind of hard not to put him in the Heisman discussion. So far this year, he’s totaled 1,102 yards on 123 carries — that’s at least nine yards a carry, meaning every time he touches the ball he almost gets Clemson a first down. His 207 yards in the first half made him the first ACC RB to do that in fifteen years and the first Tigers RB to have three 200 yard games in his career, his second of the year so far. He also etched his name at the top of the school’s list for career rushing touchdowns. The reigning ACC Player of the Year, Etienne doesn’t really have any competition to repeat as conference MVP and if there were one non-QB to throw into the Heisman race, I’d say Etienne deserves that spot.
SF
I love sports. If you’re reading this then you share that same sentiment. There’s nothing quite like watching your favorite team go up against a rival or compete for a championship. It gets even more fun if you can win cash or prizes because of your knowledge! But, do you know what’s better than winning money? Not losing money. Not even having to risk a dime actually! What a concept! We at Brag House think so too! Thus, we have made it easy and accessible for fellow bragger both new and experienced. Worried about losing your hard earned money on a close game? Forget about it! At Brag House, the only currency you need to worry about are Brag Bucks, which we supply, and, of course, bragging rights. So subscribe now to be the first to download when we go live Nov 5th -- and we will give you Brag Buck! Invite your friends or challenge that co-worker you don’t like - And we will give you Brag Bucks! It’s so easy your grandmother could do it, and after she beats you in a head to head matchup maybe she’ll send you some Brag Bucks for Christmas.
Share
0